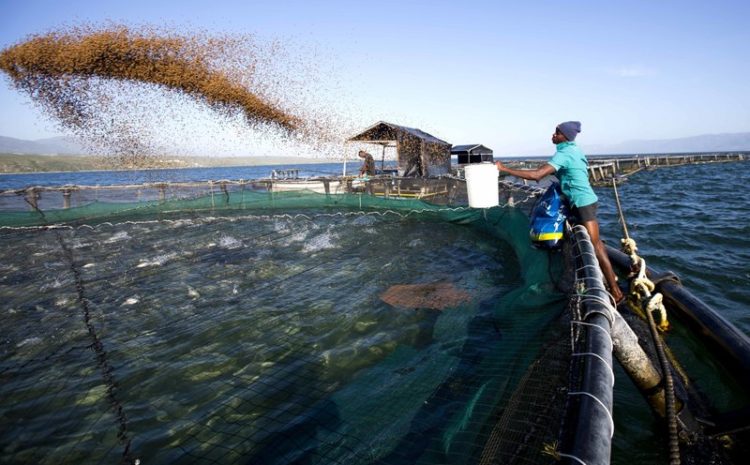 In this April 17, 2018 photo, a Taino Aqua Fish worker throws food to tilapia fish being grown within a netted area in Lake Azuei Fond in Parisien, Haiti. Hatchlings are raised on a vegetable-based feed and are ready to sell after four months. (AP Photo/Dieu Nalio Chery)

FOND PARISIEN, Haiti (AP) — Two Haitian brothers came back to their homeland to build a livelihood on Lake Azuei, a turbulent expanse of water that has often been cruel to those living along its shore, flooding homes in the border town of Fond Parisien and blocking a key highway into the Dominican Republic.

Hans and Patrick Woolley left careers in online startups and hospital administration in Los Angeles and New York to invest in their home country and try their luck at fish farming in the lake, which is less than an hour away from Haiti’s capital of Port-au-Prince. Their cousin Gilbert Woolley gave up a hospital administration job in L.A. to join them.ADVERTISEMENT

Working near the ghostly ruins of flooded homes sitting in the lake, the three graduates of U.S. universities spend their days overseeing their start-up, Taino Aqua Fish, which uses fish cages just below the lake’s surface to produce affordable fish for Haitians, who complain about a lack of fish.

“Fish is a luxury in Haiti, but we want to change that,” said Hans Wooley.

The Woolley family inherited some land along the shore and then bought more in the 1970s as it dreamed of raising crawfish, but the land went unused until the two brothers decided to try fish farming a few years ago.

Joined by their cousin, they started with 16 cages in 2014, building some out of PVC pipe and netting and repurposing others from Taiwan that were once used to raise tuna. They bought tilapia hatchlings from the aid group Operation Blessing. Today, they have 21 cages and 60 employees, including security guards who keep watch during the night to keep thieves from raiding the cages.

Hatchlings are raised on a vegetable-based feed and are ready to sell after four months.

The three men market their crop, which can reach 20,000 pounds a week, to small, informal markets as well as supermarkets, hotels and restaurants. In a country where most people live on less than $2 a day, their tilapia costs about $3.50 a pound, which is $2 less than the more common pink fish.

“Fish should be affordable for all Haitians in Haiti,” said Hans Wooley.

He sees further potential in this border town for entrepreneurs, pointing to water sports and agriculture.

Many residents of Fond Parisien long looked for jobs elsewhere in Haiti or more often in the more prosperous Dominican Republic, but now people approach the Woolleys’ fish company.ADVERTISEMENT

Laguerre Espadien is grateful that the fish farm gave him work and allowed him to move back to his hometown and get away from the violent crime in Port-au-Prince.

“When I quit my job in the capital I thanked God because I’m alive. Now I’m taking care of my three children on my salary,” said Espadien, a 36-year-old who joined the farm’s delivery department when the company opened.